Chemical Engineers are not Chemists

This is part of a series of articles that appeared CETD championed issue of IEM's monthly publication - Jurutera, September 2013. The article is best viewed in its original published form, available from IEM in print or online.

Ir. Professor Mohd Ali Hashim is an unassuming man and so soft-spoken that I wonder if his students ever take advantage of him. But make no mistakes. Five minutes with the Professor of Chemical Engineering at University of Malaya and one realises that there is a steely presence behind his patiently quiet demeanour.
He shows Ir. Professor Dr Dominic Foo (Chemical Engineering Technical Division chairman of IEM) and I some facts and figures to back up his replies to our queries during an hour-long interview in his office.
He is smartly dressed with a tie to match, which he admits, at the end of the interview that he seldom wears, preferring a more casual style.
We wanted to know about how chemical engineering started in this country approximately 40 years ago. Being the most senior chemical engineering professor in this country, Ir. Professor Ali told us about the story. The university’s Department of Chemical Engineering was established in 1975 (first in Malaysia, followed by Universiti Teknologi Malaysia in 1983 and Universiti Kebangsaan Malaysia in 1984) with the help of Professor John Kirkaldy, a Scotsman. Before that, an undergraduate course on chemical technology was offered in the Chemistry Department at the Faculty of Science.
At that time, only a selected few were among the intake, less than 10 students a year. “Today, there are about 60 students annually,” said Ir. Professor Ali. “When we first started, my students were picked for jobs by corporations, even before they graduated.”
However, he adds: “It’s not easy to start a chemical engineering department in general, as it involves very expensive lab equipment.” Later, he walks us to the lab to show us the impressive equipment set-up.
Despite this, more and more universities have started offering Chemical Engineering studies as the demand for chemical engineers continues to grow. Ir. Professor Dr Foo stated that there are more than 10 Chemical Engineering departments set up in the past 10 years, bringing more than 20 departments that offer Chemical Engineering courses in Malaysia, with approximately 1,600 graduates each year. However, Ir. Professor Ali agrees with Ir. Professor Dr Foo that while graduates are excellent in the “hard” skills part, many are still lacking in soft skills or the ability to communicate and make presentations. One of his ways to overcome this is to get his students to do reports as presentations which he feels, will prepare them better for the job in the real world. 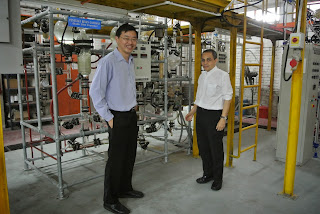 WHAT IS CHEMICAL ENGINEERING?


However it seems that not many in this country actually know what Chemical Engineers are doing for their professional works. Ir. Professor Dr Foo mentioned an interesting finding on a survey that he conducted a few years back with his first year students. For three consecutive years, more than 40% of his student population had enrolled for Chemical Engineering because “I like chemistry”!
There has been a tremendous change of approaches to chemical engineering over the last many years. For a very long time, unit operations and the systemization of transport phenomena have been the core of Chemical Engineering education. The 1960s saw the emergence of process systems engineering. In barely a century, chemical engineers have erected the technological infrastructure of much of modern society. Without their contributions, industries as diverse as petroleum processing and pharmaceutical manufacturing would not exist as we know them today. Currently, a confluence of intellectual advances, technological challenges, and economic driving forces is shaping a new model of what chemical engineering is. A major force behind this evolution is the upsurge of new products and materials that are entering the market. Whether from the biotechnology industry, the electronics industry, or the high-performance materials industry, these products are critically dependent on structure and design at the molecular level for their usefulness. Another force shaping the future of chemical engineering is society’s increasing awareness of health risks and environmental impacts from the manufacture, transportation, use, and ultimate disposal of chemicals. These will be important sources of new challenges to chemical engineers.
When trained in the four-year chemical engineering programme, a graduate can work in waste, food, biochemical industries, apart from the conventional chemical industrial sectors, such as oil and gas, petrochemicals, palm oil-based oleochemicals, etc. The chemical engineering programme trains them basically, for numerous industries, says Ir. Professor Ali. 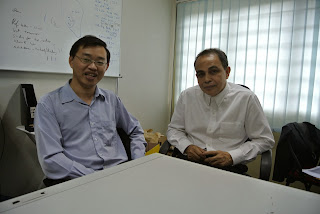 The chemical industry in the country and Asia Pacific region is developing at an extremely fast rate, creating a huge, insatiable demand for chemical engineers. The oil and gas sector, for instance, he says, is expanding and as new oil fields are discovered, the job market is expanding at an equal rate. Ir. Professor Dr Foo added, Malaysia has emerged to be the design hub for the oil and gas industry in Asia Pacific. There are a lot of new companies (oil and gas, safety and environmental consultants) that started their business in Kuala Lumpur, to support their business in the region, and even worldwide (such as the case for ExxonMobil, see the following page). Ir. Professor Dr Foo noted that there are many new companies sprouting up that are looking for chemical engineers. Those with 4-5 years experience are being snapped up by companies to support their projects in the Middle-East, he says. This explains why more universities are offering chemical engineering programmes, as there are indeed vacant to be filled for this profession. He also believes that the growing trend will continue at least for another 5-10 years.
“Then there is the palm oil-based oleochemical industry which is growing with new products and by-products being created all the time.”
Ir. Professor Dr Foo chips in: “And do you know the semi-conductor industry also has a need for chemical engineers?”
Seeing the look of surprise on my face, he happily explains: “Yes, think of solvents, waste materials etc. Some 20% to 30% of my students are working in the semiconductor industry. Chemical engineers have the advantage over chemists when employed as quality controllers as they are trained in the operation process. They also help to deal with the waste treatment in the semi-conductor industry.”


Ir. Professor Dr Ali adds: “There is also environmental engineering, previously (the domain of) civil engineers. But today, people realise that chemical engineers have more to offer, particular dealing with industrial effluent. After all, ensuring the treatment process to perform as it should be, is the job of a chemical engineer.”
In the last 20-40 years, greater awareness of environmental issues and safety has created the need for chemical engineers to ensure safety in the production process and to promote sustainable development. Ir. Professor Ali says HSE (Health, Safety & Environment) is getting more emphasis in the curriculum of any Chemical Engineering programme offered.

According to IChemE (Institution of Chemical Engineers UK), sustainability is the foremost key issue regarding the chemical engineering profession. The three principal areas of focus are sustainable energy, sustainable technology and the 3R (Reduce, Reuse, and Recycle) concept. The world’s resources are also becoming depleted. We observe that chemical engineers are the key driver in this aspect. We see significant of works being dedicated towards the reduction of raw materials consumption, energy recovery and other aspect of waste minimisation initiative. Ir. Professor Dr Foo says: “A good example can be found in national oil and gas giant Petronas which is now taking serious measure for water minimisation in various processing sites in the country. What’s most encouraging is that they are using pinch technology which we developed locally!”
He added: “Within IEM, we are trying to foster this concept via education. In our recently completed Chemical Engineering Design Competition, we set a scope for zero emission for the students to come out with various schemes for implementing waste reduction for their design project. Besides, we also conduct workshops and seminars regularly to promote resource conservation concept.”
Presently, over 80% of the world’s energy comes from fossil fuels which emit high levels of GHG (greenhouse gas). Along with depleting reserves, atmospheric pollution from GHGs is a major issue. However, reduction of fossil fuel consumption may not be a sensible solution for a developing country like Malaysia. Instead, chemical engineers should look into the development and application of renewable energy sources.
“In Malaysia, we are blessed with plenty of palm-based biomass, such as empty fruit bunches. You can see significant research are carried out by many academics in the country in order to maximise the potential of this great energy sources.” said Ir. Professor Dr Foo.

I then asked about the issue of professional development, as I was told that chemical engineers were not keen to register with the Board of Engineers Malaysia or sign for membership with professional bodies such as IEM and IChemE. Ir. Professor Ali, the first chairman of IChemE Malaysia Branch, says it’s useful for new graduates to join bodies such as IChemE and IEM, especially those who want to work overseas. “This is important for all engineers, not just chemical engineers, as a signature acquires greater value with board membership.”
Ir. Professor Dr Foo added that, with the signing of the MOU (memorandum of agreement) between IEM and IChemE, “we should soon see some joint efforts in promoting professional development among chemical engineering community in the country”.
Posted 5:26 PM