The Chemical Engineering Technical Division organized a study tour to Bintulu, Sarawak on June 14th, 2010. The study group comprised of 9 people. The tour was led by Ir. Razmahwata Mohd Razalli.

The tour started at the MLNG plant. The group was met by Mr. Rhymie Rashidie Ibrahim, Corporate Affair. The IEM guests were first brought to a presentation room where a safety briefing was first conducted. A corporate video was then shown, providing an overview of the history, specifications and achievements of the MLNG project.

After getting a bird’s eye view of the facility, a slide presentation was given. It started off with an introduction to the MLNG complex, and a recap of MLNG 1-3’s history. A simplified LNG process flow diagram was then used to describe the plant’s process to the group. An introduction to the technology and use of MISC’s LNG ships was provided, along with the breakdown of LNG customers (60% of LNG is shipped to Japan, 27% Korea, 12% Taiwan, 0.9% China. 19% of Japan’s LNG is imported from Malaysia).

At the end of the presentation, a number of questions were asked, and answered by the speaker. A selection of questions asked were the usage of LNG in Malaysia, the makeup of engineers disciplines in MLNG, the mercury removal process from the gas, and MLNG’s involvement in downstream industries.

This part of the tour was concluded with a token exchange ceremony.

After refreshments, a plant tour was arranged, guided by a knowledgeable engineer. The group had the opportunity of observing the plant from the luxury of an air conditioned van. Among the sites the group visited were the nine 380 tph boilers, the gas metering station, flare tower, the cryogenic unit, the mercury removal unit, the Sulphinol process, and the LNG berthing terminal, where Putri Delima Satu was in port.

After the MLNG visit, the group then visited the ABF plant. The group was met there by Mr. Roy Thian Shin Min, Process Technologist and Ms. Suryani Dohan, PR Executive. Mr. Roy presented an introduction of the plant. Among the commercial tidbits revealed was the ownership breakdown of the plant (63.5% Malaysia, 13% Indonesia, 13% Thailand, 9.5% Philippines, 1% Singapore) and the plant’s market breakdown (30% of ammonia is sold to Thailand, 20% to Malaysia, 24% to Vietnam) . He then talked the group through a process schematic of the plant. Among the process discussed were CO2 removal using a modified Benfield process, steam reforming using NiO catalyst in tubes, and the urea process. The uses of ammonia and urea was explained to the group. The presentation ended with an overview of the plant’s corporate social responsibility (CSR) activities. Among the questions asked by the group was what biuret was, and how much CO2 was released by the plant.

This part of the tour was concluded with a token exchange ceremony, and lunch that was hosted by the ABF.

As the plant was not open for a visit at the time, the group was taken to view the plant from a vantage point on top of the Bintulu Port Authority building, where we were treated to a breath-taking view of the plant and surrounding environs. 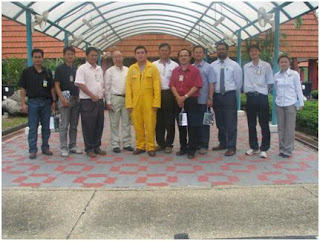 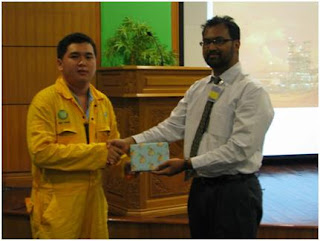 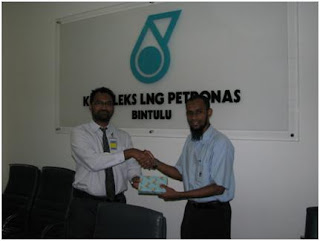 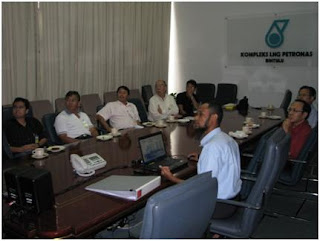